On November 12th we met the winners of Automotive Supply Chain Global Awards 2013. The Awards Ceremony & Gala took place in the Berkeley Hotel in London.
The prizes were presented in various categories to the companies that stand out in their business activity with remarkable professionalism and best quality of services. Adampol S.A. was nominated in three categories: Third Party Logistics, Road Transport Company and Terminals and Ports Operator and won first place in the Terminals and Ports Operator category. The award was accepted by Adampol’s representatives, Jolanta Szczepańska and Jolanta Grądzka.
As it was emphasized at the award’s ceremony: ” the Adampol S.A. Małaszewicze terminal is situated on the route connecting Europe and Asia with access to both European and Russian rail networks. Adampol has demonstrated an exceptional ability to work within the Russian import regulations and to efficiently facilitate the SKD processes leading to well-organized container handling and onward transport to Russia.”
This award is greatly appreciated by Adampol S.A., especially taking into consideration that the highest standard of services have been Adampol’s top priority for many years. 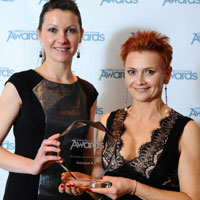